Not all Constitutions are created equal

Why do we elect County Commissioners directly rather than using the township supervisor model outlined in the 1963 Michigan Constitution?

Well, first off, what is the township supervisor model outlined in the 1963 Michigan Constitution? Article VII Section 7 states: “A  board  of  supervisors  shall  be  established  in  each  organized  county  consisting  of  one  member from each organized township and such representation from cities as provided by law.” Sounds pretty swell, right? So, if the 1963 Michigan Constitution says that this is the way it should be, then why isn’t it the way that it actually is?

Because, friends and neighbors, of a foundational Constitutional principle. What? How can that be? The 1963 Michigan Constitution sets out the rules very plainly, so, what gives? As it happens, the United States Constitution is the highest legal authority and any Federal or state law or state constitutional provision may be overturned by the Supreme Court of the United States on that basis, which is exactly what happened in this case. According to the United States Supreme Court decision in Avery v Midland County  “units with general governmental powers over an entire geographic area not be apportioned among single-member districts of substantially unequal population." CONSTITUTIONALITY, PA 1966, NO 261, 380 Mich. 736, 740 (Mich. 1967)

What does that mean exactly? The basic idea is that representation of people in government which is based upon where you live geographically should generally seek to equalize the number of people represented per representative. Super simple example. Let’s say we had a county with 100,000 people and there were 10 townships and zero cities. Under the original 1963 Michigan Constitutional framework and the United State Constitution this would work out great. Ten perfectly equal sized districts with one representative each.

Does that seem a likely scenario, however? Nope, not very likely. Much more likely is 16-20 different townships of varying population density and some number of differently sized cities. Under the originally adopted system one township supervisor might represent a couple thousand people while another might represent tens of thousands of people. This would give the people in sparsely populated townships more power in county government while tending to sap power from those people in more densely populated townships.

The whole question came down to the long standing American tradition of equality before the law and equality in representation in government and basic fairness. Now, in light of that Supreme Court decision, just like with Congressional district apportionment (drawing geographic district lines) and State Senate and State House district apportionment after each census, the same thing happens at the county level for the County Commission. Equal representation is what the goal is and after the new districts are apportioned they stick around until the next census, ten years down the road.

And that, folks, is why we directly elect County Commissioners.

Of Robin Hood and Hobbits

What the heck? I thought this was a political campaign not a book or movie review? Yes, yes. Very fair. The fact of the matter is that Robin Hood and Hobbits share something in common with our quest for answers about the County Board of Commissioners. Shires.

Shires were first created by King Ine of Wessex in the 7th century in order to better manage his kingdom. English common law is the foundational basis for much of our governmental principles and structures and shires came along for the ride. The name got changed over the years and we Americans don’t have a King, but the principle of the shire exists to this day.

The place where Bilbo started his journey shows us the important elements of a Shire. A Shire has regions like Bilbo's Farthings, Marches, and Fields and population centers like Bywater and Hobbiton. Lenawee County here in modern day Michigan has townships like Madison and Raisin as the regions and population centers like cities, such as Tecumseh and Adrian, and villages, such as Clinton and Deerfield.

Lenawee County isn’t ruled by an absent King at war in the holy land while his brother’s Sheriff robs and murders the people in the King’s name nor is it a completely autonomous patchwork of independent self governing entities within a forgotten backwater of the Kingdom of Gondor. Lenawee County, legally, exists as a matter of State power expressed via the Michigan Constitution of 1963. As we have seen, long before 1963 the people of Michigan recognized that exercising direct control from Lansing would be extremely difficult and shifted responsibility for various administration and enforcement duties to local authorities.

Who are those local authorities? The County Sheriff, indeed, the Sheriff of Nottingham from the story of Robin Hood as we know him was actually known as a Reeve. The modern day English word Sheriff comes from combining Shire and Reeve. Then there are the various local courts. And, finally, the County Board of Commissioners. Which is where we started this whole journey in the first place, isn’t it?

Well, if you haven’t figured it out by now, we aren’t going to answer very many questions here in this post. In fact, a curious person might argue that the number of questions just increased by a fair bit. Having said that, I do think we can answer the question in a very general sense. The County Board of Commissioners is vested with power by the State of Michigan to oversee and administer various functions as outlined by the Michigan State Constitution of 1963, decades of authorizing language from the Michigan Legislature, and various amendments.

Next time perhaps we can finally answer the question of how the members of this body are elected.

It has been a busy week for Democrats seeking seats on the Lenawee County Board of Commission.

The Adrian Daily Telegram's coverage of Juanita Kelly's and my own campaigns generated quite a bit of discussion on-line. A very fair write-up by Dmitriy Shapiro. 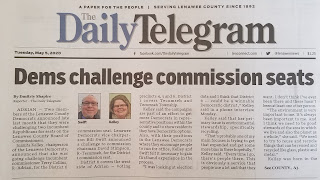 Juanita Kelley for County Commissioner District 6 and I hope to provide a progressive perspective to the Lenawee County Board. Lifting up the voices of the unheard. Asking the questions not being asked. Restoring honesty, integrity, and justice. Lenawee County deserves better.

The coverage of The Tecumseh Herald couldn't have been better. They published my campaign announcement Press Release verbatim. Imagine that? The ability to communicate directly with your constituents without any filter. I must say, I think that Publisher James Lincoln's willingness to do so is just capital. Thank you, sir! 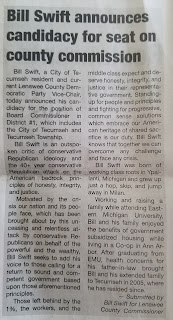 What is the County Board of Commissioners?

I asked that question in my first post. When I first started my journey of citizen re-engagement back in the fall of 2016 I had no real firm idea what it was that the Lenawee County Board of Commissioners did in any real and tangible sense. I had some notion that they were the legislative arm of county government and that they passed some enforceable regulations and had some other related duties. It turns out it is a bit more complicated than that.

Fifty seven odd years ago, in 1963, the State of Michigan rewrote its constitution. The previous constitution had been written in 1908. Who cares? Right? Well, the 1963 Michigan Constitution details how state government shall be organized and structured, enumerates rights and responsibilities of individuals and also for various subunits of government, like counties, cities, and townships, of government, etc. Specifically, for local government we want to look at Article VII.

So, that’s it? Just look over article VII of the 1963 Michigan Constitution and you’re ready to go? Nope. There are a few things which muddy the waters, here. Constitutional Amendments, like 2018’s Proposition #2 - to establish an Independent Redistricting Commission, modify the Constitution. So, we need to know about any of those which passed since 1963 which specifically affect or address local government in order to know what’s what.

So, just the Constitution and the amendments. Got it. Good? Nope. What? More? Authorizing legislation, friends and neighbors. Authorizing legislation and ballot initiatives. See, the Michigan Legislature, the Governor, and even the people of the state can affect changes to the legal mumbo jumbo stew that are the laws, regulations, and the like which impact local government.

Finally, the Michigan State Supreme Court and the courts superior to it have made rulings regarding the interpretation of the 1963 Michigan Constitution, the various amendments, and authorizing language and ballot initiatives. Wow. That’s a lot. What was the question again?

Oh, right, what is the County Board of Commissioners? Well, the 1963 Michigan Constitution Article VII Section 7 quite clearly states:

See, easy, one member from each township and somehow we pick some number of members for cities. We’re guessing that “by law” here is something which wouldn’t exist as of the writing of the 1963 Michigan State Constitution, but would come later by act of the legislature. Guess what? That’s not how it works. What? How is that possible?

Footnote to this Article VII Section 7

What is the County Board of Commissioners? It doesn't seem like the answer is straight forward, does it? More on that next time.
Newer Posts Older Posts Home
Subscribe to: Posts (Atom)