Remembering and honoring the fallen 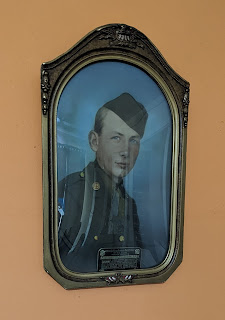 Remembering and honoring the fallen this day. This is my great uncle Calvin. My maternal grandfather's brother. He was just a kid. He was ripped from his family and thrown halfway across the world onto the shores of a fascist dominated Europe. He never came home. In the early winter of 1944 an insane megalomaniac, in a desperate attempt to hold off the inevitable fall of his twisted evil empire, ordered a last ditch attack which became known in history as the Battle of the Bulge. My great uncle's unit, the 75th Infantry Division, was just off the boat and most of the men didn't know their behinds from their elbows. They had been sent to the region because it was thought fairly safe and unlikely to be involved in any immediate action. Instead, these young men, most of them really just boys off the farm, found themselves in one of the most deadly and destructive battles of World War II. So many times, I've listened at weddings and family reunions of other families to the stories of veterans who came home, more than a few who were in this battle. This I know from these now long deceased men, bravery is something unwanted which is thrust upon scared and maybe even terrified human beings. We know that ourselves all too well from recent events in Texas. Honoring these fallen patriots who have given all, today, is the least we can do. We need and we must do more to honor their sacrifice. We must be brave, even though we are scared, and we must be moved to action to defend the Republic from the rise of fascism which is ongoing currently in our country. If you be a true patriot and love the ideals that we once trumpeted to the nations, you must unite and be brave.

I'm running again as a Democrat for Lenawee County Commissioner for district #1. This includes the City of Tecumseh and Tecumseh Township. I am proud of my Democratic values and intend to bring them to the table every single day. Democrats fight for people. Democrats fight for traditional American principles like liberty and justice FOR ALL. Democrats fight for traditional American values like integrity, transparency, and accountability in government. Democrats fight for a future where civil rights, librarians, teachers, and school children aren't under siege. Finally, and you can take this to the bank, you will never have to question if my vote is based on something other than my best attempt to represent YOU before the county commission.
https://secure.actblue.com/donate/bill-swift-for-lenawee-1
Newer Posts Older Posts Home
Subscribe to: Posts (Atom)